One of my theories for rapid PCB prototyping is EDM, or electro-discharge machining. The idea behind EDM is that you have an electrode hooked up to negative voltage, dunk the system in a high impedance fluid, and then put a potential on the metal workpiece. When that electrode is close to the metal and the potential is high enough to ionise a path through the dielectric fluid, an electric arc gets created between them, taking out a chunk of your workpiece.
Basically a spark welder to remove material.
This is often used for removing broken taps from holes or machining very deep, narrows holes with high precision.

I think I can use this to directly erode paths between traces on a sheet of copper-clad.

EDM is one of those strange niche tools that only machinists are really into. The hardcore kind of machinists that don’t really internet well. There seem to be about three resources on the internet for details on the inner workings of these machines: one CNC forum, one thread of a 3D printing forum, and one Yahoo group. None of these are particularly fantastic.
Fortunately, machinists are a lot more into books. Robert Langlois put out a couple how-to manuals in the early 2000s, and Ben Fleming has some much more recently.
Someone got in contact with Langlois recently, and relayed that he lost interest in the project, would definitely like to see Raspberry Pi control of an EDM, and is open sourcing his books. So, naturally, I’ve read those books. I’ve also found some academic papers and expired patents that go over some design constraints.

There really are three major building blocks in building one of these: a CNC platform, the dielectric fluid immersion tank, and the electronics. The mechanical guys have got the first two figured and polished to a degree that I’m not capable of. The circuitry, though, is all extremely simplistic. I think I can add some microcontroller controls and improve hugely on the designs.
Most of the EDM schematics out there are just rectifiers and 555 timer-based pulse circuits.
One of the more sophisticated designs out there, The Garden of EDM by C. Scott Ananian provides an excellent rundown of design decisions, and has some similar ideas to what I’ve come up with independently. His version seems a unnecessarily complicated, though. Especially considering he never actually built his circuit. I’ll start with a much simpler design, offload more to a microcontroller, and end up with more control out of the deal.

That’s enough substanceless discussion for now. Starting with sink-EDM, the circuitry and mechanical Z-axis go hand-in-hand. I sat down for a few hours and built something in Solidworks: 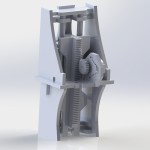 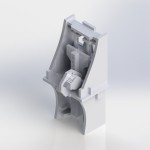 After another few hours, I’ve got it laser cut to get this: 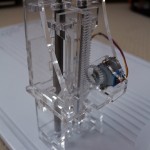 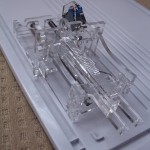 Man, clear acrylic is really hard to photograph properly. Everything was cut on a single try and slotted perfectly into itself on the first try. I’m really quite pleased. The rails are scavenged from an old scanner.

And then alongside that, this is the very first draft of “maybe what I’ll build, unless I have some better ideas”: