A Quick Re-Intro to the Lathe

As my current favourite project is primarily a software one, I really need something on the side to keep my hands busy.

So I opted to do a small, easy metal lathe project. You know how those go, right?

It ended up taking over 40 hours, mostly because I am bad at this. But I learned a lot!

Here is the excellent old-school lathe I used: Initially, this was going to be all brass, but Metal Supermarket doesn’t really carry a lot of red metals. Metal Supermarket is awesome, but pretty much the only stuff they carry is solid brass rod. It’s difficult to get a concentric hole through the entire length required by a pen, so that doesn’t work too well.

While browsing their stock, though, I found some gorgeous thick-walled stainless steel tube stock. Had to buy it.

I started out without a complete plan of what I was trying to do, and it’s clear that I was just playing around with shapes. So I decided I liked that, parted off the left side, and machined some brass rings to go around the grip as extra bling. 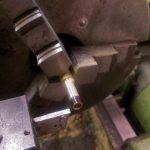 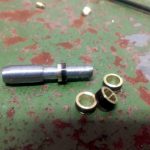 You can see the scales I was working at, this all ended up being pretty precise work. Our lathe is a little large to comfortably get in to close features with the tailstock in use, but it’s still possible when you’re careful. This piece had no way to effectively join it to the other side of the pen due to lack of forethought, so it had to be scrapped.

The next version was a little bit better, and shows the steel-brass-steel ring pattern, and kinda how everything fits together. 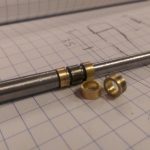 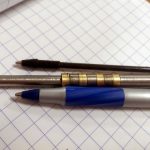 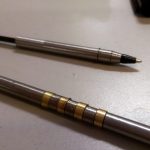 But then, one of the biggest takeaways I learned on this project is that working with stainless steel suuuuuuucks. It’s really malleable, and is able to bend with low forces, even less than an inch away from where it’s being held.

Due to the high carbon content, it’s super hard on the tools and required frequent resharpening. When the tools are dull, the metal goes straw-coloured due to heat treating really quickly, and gets even harder.

So here’s attempt number three. I’m at about thirty hours by now, but getting faster after every failure. I’ve attempted to fix everything together with superglue for machining, but there are issues with that. I’ve seen people use superglue for all sorts of workpiece holding in brass, but brass is really soft and easy to work with. While trying it with steel, the forces are much greater, in addition to the steel getting warm and melting the glue. Basically an exercise in frustration and not really worth it (for steel). Attempt number four used a separate aluminum piece that I machined into a very thin-walled tube – about one quarter millimetre walls – instead of a single steel piece, because it’s much easier to work with. Abandoning superglue, I tried using silver solder. This was a risky prospect, because aluminum forms oxide layers that don’t adhere well to solder, and stainless steel just doesn’t wick until very high heats. So I used a MAPP gas torch, liquid flux, and silver solder, which resulted in… My brass rings melted right off the tube. Was not expecting that.

Okay, attempt number five. This was a tube I machined out of mild steel with the brass rings, and only silver solder between them instead of alternating with steel. As opposed to stainless steel, mild steel was really easy to work with and soldered to well. It oxidises, though, not acceptable for anything on the outside of the pen. So it needs a sheath on either end. And then roughing it out. Superglue works fine for the final steps, because there are no cutting forces trying to tear it apart. Filing and finishing it. So much filing. Part of the reason this project took so long is that between each of these steps, there’s one or two hours of filing to make all of my interference fits work. Afterwards, I sanded from 180 grit all the way up to 600 and then emery paper. It was mirror finish by the end, and with a little bit of polyurethane varnish used to seal it all in. 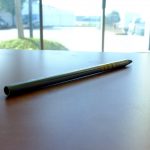 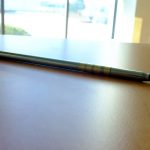 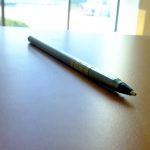 As you can see, the idea is to hold a standard Bic pen cartridge, nothing fancy. Next pen can be more complicated, I wanted this one done quickly. Things I learned:

I’m done with this project, but there are definitely some things I’m not totally happy with, to be fixed for the next one:

As discussed in a previous article, WPA2 encryption is comprised of three different algorithms layered on top of each other. I went over them in a very brief overview, so here is a more in-depth discussion on how I optimised and implemented them on an FPGA.

Also linked in that previous article, it’s worth going back and reading this presentation again. It really is a great overview of each of the three algorithms and how they fit together, without muddying the waters with the low-level details.

Disclaimer: This is my process for understanding and breaking them down. I will be using non-standard terminology, and there are certainly other ways of internalising these algorithms. My methods aren’t the only methods.

In a completely linear implementation, it would look like this:

I’m assuming a bus width of 32 bits. The input/output blocks on the end are fixed in size, and cannot overlap. Not if we want to maintain half-duplex compatibility with the parent device. That may or may not be important, but it sure does simplify the implementation for now. 165 clock cycles total.

We have a little more wiggle room with the red blocks. Because the buffer can be processed as it is getting populated by the Process Load stage, we can merge them. Extrapolated, and using the input/output as the bottleneck, we come up with this:

Notice that there’s still only one green section running at any single point along the horizontal. That’s the critical path, and dictates how many parallel operations we want to run at once.

It works out to 106 clock cycles for one cycle, assuming we run 5 hashes in parallel. So, 22 clocks per hash. Way better. The next block up, the HMAC function, contains two SHA1 functions, which is sort of annoying. The second/outer call is also dependent on the output of the first/inner one, so I can’t parallelise that at all. To fill up the 5 SHA1 operations I have going at a time, I must also be running 5 separate HMAC operations.

There is one optimisation to be done, though, mentioned in the presentation. It’s not obvious how it’s useful in a concurrent environment, but bear with me.

Part of the algorithm requires two buffers to contain the ‘secret’ portion of the HMAC input, padded with 0x36 or 0x5c up to 64 bytes. The parent algorithm, PBKDF2, iterates two HMAC functions, 4092 times, all with the same secret variable. That can be calculated once and used for the entire loop.

If everything is done in parallel, then one would expect that the calculation could be done on-the-fly with little to no penalty. When you consider that each round of SHA1 is 64 bytes, however, you realise that a padded 64-byte input message, followed by the ‘secret’ variable requires two complete rounds of the SHA1 function to come up with the final result. But the first round of SHA1 results in the same output, every time, and can be precalculated. This turns the HMAC algo from what is effectively four SHA1 operations into only two. Note that they’ve actually written this algorithm incorrectly, there is an additional XOR to combine each stage of x1/x2 into a final result, but no matter for this discussion.

The PBKDF2 part is by far the most expensive step, because the area of most FPGAs will be too small to unroll 8192 copies of the SHA1 algorithm (which requires minimum (80 words * 4 bytes * 8 bits = 2560) bits of buffer space). One more optimization could be done, given the right conditions, and it’s a doozy:

The final, very last operation in the whole mess is to append x2 to x1. No hashing after that. That means the final output is two groups of 5 words (40 bytes total). This is the Pairwise Master Key. It is statistically unlikely that the first 20 bytes will be correct, but the second group would be wrong. This means that if we have the PMK and only need to verify it, we can do these calculations with exactly half the silicon area, or twice the speed.

Unfortunately, in this particular use-case we don’t have it, but it’s a great trick to keep up our sleeve.

So what do we have in this use-case?

We’ve gone from the wifi SSID and passphrase, known as the master key (MK), and from that, generated the Pre-Shared Key (PSK), which is known as the Pairwise Master Key in this particular implementation of the PBKDF2 algorithm.

To verify the PMK against the passphrase, something called the “Pairwise Key Expansion” is calculated. From the captured WPA2 packets, we have a few variables: client MAC address, AP MAC address, client nonce, AP nonce, and the Message Integrity Check (MIC), packet body.

The first four variables, along with the PMK get combined together in kind of an annoying way, and then compared against the MIC.

They just call it the pseudo-random function (PRF), and it goes kinda like this:

Yeah, the actual string is used in the PRF.

This gives us the Pairwise Temporal Key (PTK), which is then combined with part of the (encrypted) body of the packet we captured:

And then compare this to the MIC we’ve already captured! Easy, right?

No! It’s a huge pain and would add another HMAC_SHA1 block that we don’t really have room for. This will probably be implemented on the microcontroller firmware or the host software of my system.